All The Petty Myths

On top of Curating this collection, my novella “Midnight” is featured.  This is the prequel story to my brand new mystery series All The Petty Myths. 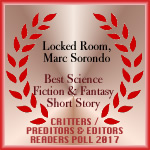 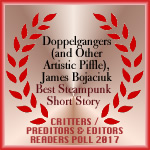 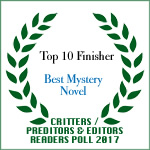 Lurking in your hometown and countless others, urban legends and folklore are all around us. To many, they exist solely as myth. But not for all. Sometimes a body is found, apparently killed by something from stories. Sometimes someone goes missing, all the clues pointing to something only spoken of around campfires. Then the police are called, or a detective, who must discover if there really is something in those stories…

Featuring M.H. Norris’ “Midnight,” which debuts her new series. Dr. Rosella Tassoni, a Forensic Mythologist, is hired by the FBI to consult on a case where seeming old world folklore is cross-contaminated by internet fauxlore. High school students are being murdered. Will the experience break her?

A detective who wishes to write his own mysteries, but can’t bring his words to life, is now trapped in a “Locked Room” mystery by Marc Sorondo. Is the killer a ghost, or a clever human?

Sherlock Holmes and his partner’s partner, Mary Watson, investigate a mad artists. He insists his doppelganger has replaced him, and that he himself is locked away in his painting. How can he see a painting which no-one else can see? James Bojaciuk answers this question in “Doppelgangers (and Other Artistic Piffle).”

A mournful soul on a lonely highway, calling for death, is the center of a murder case in D.J. Tyrer’s “Tuttle and Gretel.” What is the Vanishing Hitchhiker?

The Whole Art Of Detection 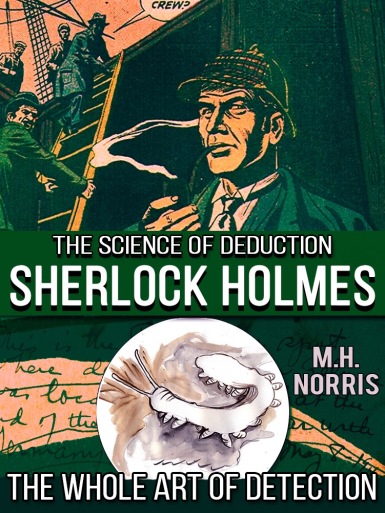 My contribution to 18thWall Production’s The Science of Deduction series.

Get it from 18thWall.com (PDF, Kindle, and EPUB)

Get it from Amazon.com (Kindle only)

Adelaide Baynes has a secret.

What you do not know her for, however, is the safe in her office. It’s fireproof, it’s bolted down, and no-one would suspect it’s there. Inside is a book that shouldn’t exist, written in the clear, copperplate hand of a man long dead (if he was ever real)–Sherlock Holmes’ The Whole Art of Detection.

Dr. Baynes’ keynote speech is interrupted. A famous author has been murdered–and the crown demands she look into it. As she investigates, she descends into a world of death threats, bad writing, and obsessed fans. All this to say nothing of a fat white worm, said to be unknown to science…

Does this tie into one of Sherlock Holmes’ great unsolved cases? 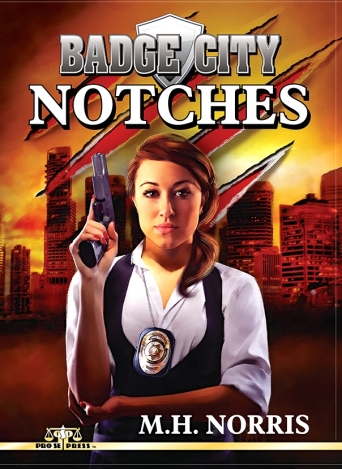 Get it from Amazon.com

A place where the tenacity and the courage of the Police force is legendary?

A town where criminals know there are still good cops they should fear?

A family that bleeds blue generation after generation?

A concept created by Tommy Hancock, Badge City focuses on three generations of a familiy of police officers in a city so known for the strength and honesty of its law enforcement agencies, the world knows it as Badge City. And Author M. H. Norris introduces the world to not only the city, but to one member of the most respected police family in town- Deidre Gaye Brighton Tordano in the digest novel Badge City: Notches.

When young girls start showing up dead in family friendly locations around the city, Detective Deidre Tordano is called to solve the case. But between similarities to her daughter and the case getting close to home, does she have what it takes to find the culprit?

Basil Rathbone plays a game of deduction and death against a madman who is convinced he’s as good as Sherlock Holmes. Errol Flynn crosses swords with men who take his star-power a bit too literally.

Ginger Rogers, Lucille Ball, Jimmy Stewart, and Henry Fonda have a double date with murder in the legendary Coconut Grove. Shirley Temple pays a diplomatic visit to East Berlin as plans for a German super-communication device are stolen, and a little girl is caught in the crossfire.

A paranoid director tasks Vincent Price with discovering why a dead man was found in his temple set. George Zucco’s latest low-budget western is interrupted by murder – and the ancient cult that may have committed them. Margaret Rutherford tangles with ghosts and Nazis at a stately manor home where all may not be as it seems.

Silver Screen Sleuths presents mystery stories in the style and tradition of Golden Age B-movie mysteries, starring the stars themselves.

My story, “Screen Time” features a mystery with Shirley Temple! It was so fun to write it and it was great to work with Nicole again!

Children Of Time: The Companions Of Doctor Who

I wrote a lovely article about K-9 for this charity volume. I spoke a bit about my experience meeting the voice behind the beloved tin dog as well as what has made him so magical for so many years.

The Doctor’s Companions. They’ve been through Dalek Invasions, Android Invasions, Zygon Invasions and Christmas Invasions. They ask questions, get in trouble, get out of trouble, and challenge the Doctor to think and act in new (usually better) ways. Children of Time: The Companions of Doctor Who features profiles of companions from all formats of Doctor Who: television, novels, comics and audio dramas. Our contributors include well-known authors, four librarians, two ukelelists, a playwright, podcasters, publishers, students, and the writers and artists behind some of the Doctor’s companions. 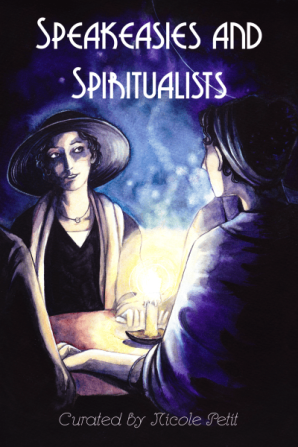 Check out my story “All The Jazz” in Speakeasies and Spiritualists! “All That Jazz” is the prequel to the first full-length Dr. Rosella Tassoni novel and is one of the first historical fiction pieces to feature real-life spook buster Rose Mackenberg.

Get It On Amazon!

She was Harry Houdini’s chief investigator. She testified before congress about psychic fraud, and discovered all the tricks of the seance trade.

Psychic investigators on the trail of the trail of a jazz musician who seems to have crawled from the grave. Amateur, livingroom seances going very wrong when mixed with grief for those who died in the war. Strange men warning out of Florida storms. Dream Demons stalking Chicago, feeding off bar-dwellers, and floors painted with mystic stars.

My story “The Robot’s A Gentleman” Is Featured In Saucy Robot Stories created and edited by Jim Beard! It is always a blast to work with him!

Get It In Print!

The world’s first fully functional robot, an ex-janitor, and a ballsy lady reporter walk into a bar… SAUCY ROBOT STORIES is equal parts funny, adventurous, thoughtful, and oh-so-pulpy…with a dash of “spicy” just to make it even more interesting. It features characters created by Jim Beard and brought to life by writers Justin Bell, Mary-Helen Norris, Aaron Smith, Travis Hiltz, Sam Gafford, and Chuck Miller in an early-1940s world the robot didn’t make, but he’s sure as heck trying to figure out. WARNING: THIS AIN’T YOUR GRAND-DAD’S ROBOT STORIES! 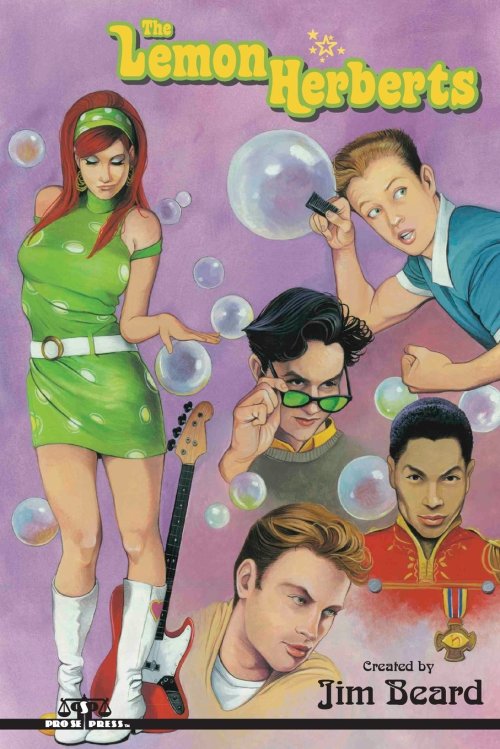 Check out my story, Puzzle Pieces in this groovy anthology. Join the Lemon Herberts, the hottest band from the 1960’s as they go on an adventure down under!

Get it from Amazon

Beat it, Beatles! Move over, Monkees! Roll it up, Rolling Stones! Here comes the greatest, grooviest, gearest rock-and-roll group of all time: The Lemon Herberts!

Hot on the heels of their chart-topping hit album, Redwing Blackbird’s Summer Solstice Tea Party, the Lemon Herberts launch themselves on their very first world tour—and straight into more danger, more peril, more sheer adventure than they ever bargained for!

Herberts’ creator Jim Beard leads a band of groovy authors for a New Pulp collection that will have you tapping your toes and humming along as the Lemon Herberts conquer the world, shining their music into hearts both dark and light around the globe!

A piece of flash fiction based off of true events.

My very first short story, featuring some characters I created as well as a new side to a familiar face.

Get it from Amazon

This isn’t the St. Nick you know!

The hero of the north, the Man of Presents, whisks across the world to fight crime and find adventure 364 days a year. Along with his Holiday Patrol: Comet, Remmy, Easy, Montgomery, Cupid and of course, the Missus, he is the world’s first line of defense against evil of all shapes and sizes.

One part comedy, one part parody and all adventure!

All The Petty Myths. Mysteries Series featuring Dr. Rosella Tassoni. The first book in the series is expected in late 2022.

My story, “The Importance of Glass Slippers” is due out soon. It’s been a pleasure working with Altrix Books and playing with their characters.